n July 2010, a small brewery in the Scottish fishing port of Fraserburgh produced what was, at the time, the world’s strongest beer. Named after the Francis Fukuyama book that declared liberal capitalist democracy the peak of human political evolution, The End of History was, according to its makers, in a sense, the end of beer. At 55% alcohol-by-volume, the brew, a “blond Belgian ale infused with Scottish Highland nettles and fresh juniper berries”, was stronger than most whiskies, vodkas and gins. It sold in a limited run of 11 bottles, each artfully stuffed inside a deceased wild animal – seven stoats, four grey squirrels – costing between £500 and £700. One of the brewery’s two founders, James Watt, pronounced the drink “an audacious blend of eccentricity, artistry and rebellion”. In their “striking packaging”, Watt said, the bottles were “disrupting conventions and breaking taboos – just like the beer they hold within them”. Not everyone agreed. Although the stoats and squirrels in question had died of natural causes, the charity Advocates for Animals denounced “perverse” and “out-of-date shock tactics” that “exploited and degraded animals”. Alcohol action groups deplored a “cheap marketing stunt” that was deliberately promoting excess in a nation with a well-known drink problem. Watt and Martin Dickie, who met at school and launched their upstart brewery in 2007, both aged 24, stood by their creation, which they had made in a local ice-cream factory by repeatedly chilling the brew and skimming off the ice to separate the water and concentrate the alcohol (which freezes at a lower temperature). 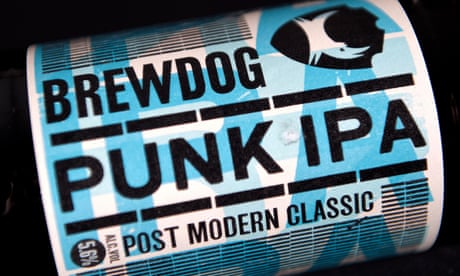 The End of Historywould clearly only ever be consumed in “very small servings,” Watt said. The brewery was simply showing people that beer could be something more than Stella, Carling or Tennent’s – that it could, in fact, be “something they had never imagined” (such as stronger than whisky). The company, he pointed out, also made a highly-flavoured beer with a verylowalcohol content. Besides, Watt could think of no better way to celebrate the lives of 11 fine specimens of dead British wildlife than ensuring that rather than being left to rot, their perfectly preserved corpses, stuffed by a master taxidermist from Doncaster, would be “forever cherished” by the buyers of what was without doubt the most expensive beer in the world. The End of History happened six years ago. It was a gimmick, a stunt, obviously. It also, sort of, was not. The company that pulled it, BrewDog, is a serial offender: it has, among other antics, driven a tank down Camden High Street; named a beer after the heroin-and-cocaine cocktail that killed River Phoenix and John Belushi; projected naked images of its two founders onto the Houses of Parliament; brewed beer at the bottom of the Atlantic Ocean; dropped stuffed cats from a helicopter onto the City of London; employed a dwarf to petition parliament for the introduction of a two-thirds pint glass; and released, for the royal wedding of 2011, a beer containing so-called natural aphrodisiacs such as “herbal Viagra”, chocolate and horny goat weed, which it called Royal Virility Performance. BrewDog has described itself as a “post-punk, apocalyptic, motherfucker of a craft brewery” and urged its customers to “ride toward anarchy”. Its slogans include “In hops we trust,” “This is the revolution – so help me Dog,” and “Changing the world, one glass at a time.” It has a document that it calls its charter, which contains phrases such as: “We bleed craft beer,” “We blow shit up, and “Without us, we are nothing. We are BrewDog.” BrewDog embodies, in short, much about modern life that many people love to hate, particularly online and almost certainly beneath this article: you don’t have to search far to find someone on the internet calling BrewDog “hipsters”, “pretentious”, “wankers”, “arseholes”.